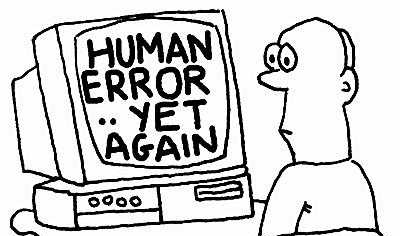 Human error has now has now topped the chart as the chief cause of IT service incidents as per the reports published by Dimension Data’s 2014 Network Barometer.

It was also found in the report that in the year 2013, only 16% out of 91,000 IT service incidents that were logged through Dimension Data service centers was because of devices, whereas the other 84% of incidents was related to several of the other non-device factors such as telecom failures, human error, and other set of environmental factors.

The largest set of incidents in the field of IT is because of human error and out of the one third of these incidents- 6% was due to configuration errors with 26% involved other human errors and these can be potentially avoided. As per the report, this is a very serious and worrying data because quite a huge portion of incidents tends to fall outside the traditional remit of the support provider, and thus it has to be resolved by the company itself.

It was initially published in the year 2009; the Network Barometer Report was aptly gathered and compiled from technology data which was gathered from 91,000 service incidents that was logged in for client networks.

The Dimension Data had further carried out around 288 technology assessments that had covered around 74,000 technology devices in companies of every size and all the industry sectors had smoothly crossed 32 countries.

Wide area networks or telecom were known as being the second most frequent issues that topped the list which was around 22%.

Physical environment issues were the factors listed third and they were temperature control issues, power cut problems and air-conditioning failures. They represented around 15% of all industry sector incidents. Device related issues were placed in the forth slot and 14% of the incidents were related to hardware issues. Followed by the other 2% was the software bugs issue.

Rich Schofield, the business development director for networking of Dimension Data stated that the latest status of the statistics indicated that the service incidents was not linked or related to device related and thus it fell outside the arena of typical maintenance contracts. This is the reason why it will have to get resolved by the company’s internal support resources.

If seen from the lifecycle perspective, one might expect that the rate of obsolete devices would tend to be higher than the ageing or the current ones. This is so because, obsolete or outdated devices, have a low rate of maintenance option, which is generally limited. Nevertheless, the present years analysis displays the fact that the failure rate of obsolete device tends to be 1% lesser than the ageing or the current ones.

He also stated that the company did take steps to investigate how likely the chance of obsolete device to stop working was. However, were highly surprised to get to know that the data somehow indicated the other way around.