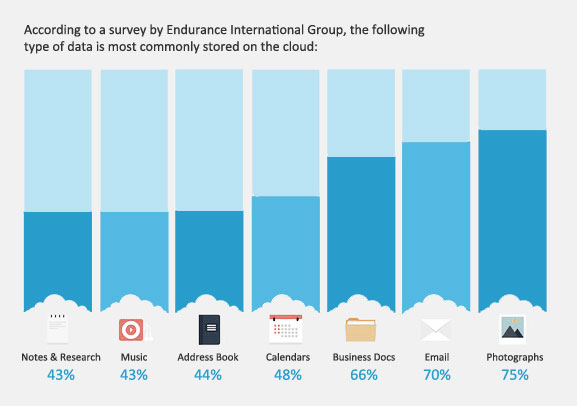 As per a recent survey completed by forbes, Forbes magazine shows that almost three quarter’s of businesses use some form of cloud computing platform,whether that is for storing photos, emails, music streaming or address  books and calendars. In this survey mostly used cloud computing platforms were Google, Microsoft and Amazon. Generally most of the companies uses four cloud services. 86% of  companies use more than one type of cloud 6 services.

Studies indicate that more than 50% of all information technology will be in the cloud in near future i.e. within the next five to ten years cloud computing will be the choice of every company. Hybrid  clouds are expected to represent 43% of the market in the next five years – even higher than both public and private. It is expected that By 2016 the Asia-Pacific market can account for up to 1.5 Zb of global cloud computing usage. This will make it the market with highest number of users worldwide.  By comparison, the second highest users will be represented by North America which will account for 1.1Zb. A Zb is a Zettabytes, which is equivalent to one billion terabytes.

Thus, in order to benefit effectively from increasing power and capabilities of cloud computing we need fast and more reliable Internet connections.